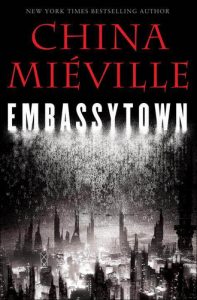 In the far future, humans have colonized a distant planet, home to the enigmatic Ariekei, sentient beings famed for a language unique in the universe, one that only a few altered human ambassadors can speak.

Avice Benner Cho, a human colonist, has returned to Embassytown after years of deep-space adventure. She cannot speak the Ariekei tongue, but she is an indelible part of it, having long ago been made a figure of speech, a living simile in their language.

When distant political machinations deliver a new ambassador to Arieka, the fragile equilibrium between humans and aliens is violently upset. Catastrophe looms, and Avice is torn between competing loyalties: to a husband she no longer loves, to a system she no longer believes in, and to her place in a language which speaks through her, whether she likes it or not.

First, check out that cover. Isn’t it awesome? Maybe it’s my recent obsession with black-white-red color schemes, but I love it.

China Miéville is known for bending things: definitions, genres, minds. His latest novel, Embassytown, follows that vein. It’s a science fiction novel, a mystery, a thought experiment. It’s a book that, at one point, I thought of as the Opium Wars in Space, except it’s not like the Opium Wars at all.

What drew me to the book was the idea that it’s all about language: the Embassytown colonists and their Ariekei Hosts speak very different languages. The Hosts have two mouths that speak in tandem, but simply emitting simultaneous sounds is not enough to speak their language: machines cannot speak it; they cannot write; they have no word for “that.” Hosts can only speak the truth, because their language is truth, and they only hear Language when there is a soul behind the sounds. They need humans to act out events so they can construct similes; for this to be like that, that must have actually happened. Avice Benner Cho, the main character, is the girl who was hurt in the dark and ate what was given her, and the Hosts use her simile all the time.

So that’s what intrigued me. What really impressed me was Avice’s growth. This is a character who is very different at the end of the book than she is at the beginning, and yet her growth is so masterfully done, so natural to her surroundings, that it never felt like a character arc. It felt like someone maturing to meet her circumstances; it felt real.

I’m not normally in for alien-world science fiction. Those books normally get too weird for me, to be honest. (Even in Embassytown it still gets weird, and I have absolutely no idea what a Host looks like. I ended up just imagining them like praying mantises and adding eye stalks and other bits when the narration called for them—then I’d go back to my praying mantis model.) But Embassytown kept me interested and engaged. It may have been that there was a lot of linguistics in it (mostly from Avice’s husband, who is a linguist) and I was able to recall the linguistics I studied in college. That probably helped. But Avice kept me rapt. I devoured this book. I thought about it for days afterward (I’m still thinking about it).

The book jacket copy and the Library of Congress information for Embassytown make loyalty out to be one of the main themes of the novel. I didn’t get much of that vibe. Sure, there are little loyalty battles in there, but I didn’t come away from the book aching about loyalty. The ache that I came away with was the idea that change has to happen, progress has to be made, but sometimes what you leave behind is just as valuable as what you’re moving towards. Sometimes you have to leave things behind out of necessity, and what you leave them for may be better in some ways, worse in others, but it’s what you need. And that’s a little sad. Bittersweet enough to make me ache.

I guess that’s probably too hard to fit in Library of Congress filing information. Basically, this book is wonderful. I’ll likely reread it. I feel like I shortchanged everyone involved in its creation because I got it 50% off at the Borders liquidation. And when it comes time to nominate books for the Hugos, this one’s going to be on my mind.

Over the past few weeks I finally read The Prestige[...]