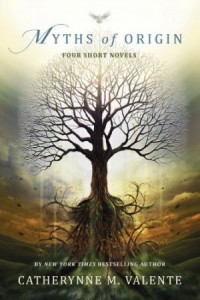 New York Times bestseller Catherynne M. Valente is the single most compelling voice to emerge in fantasy fiction in decades. Collected here for the first time, her early short novels explore, deconstruct, and ultimately explode the seminal myths of both East and West, casting them in ways you’ve never read before and may never read again.

I found this collection of short novels the last time I visited a city with a decent brick-and-mortar bookstore. I’m glad to have been introduced to Valente’s unique voice and style, and I have her children’s novel, The Girl Who Circumnavigated Fairyland in a Ship of Her Own Making, waiting for me after I put this volume back on the shelf. Because this book contains four novels, I’ll tackle each one in a mini-review and follow up with general comments.

A woman wanderer, a Maze like no other, a Monkey and a Minotaur and a world full of secrets leading down to the Center of it All.

The Labyrinth is Valente’s first-ever novel. Before trying her hand at long-form fiction, she was mostly a poet, and that prior experience flashes its colors in the prose of this short novel. The language is beautiful, the structure dizzying and mazelike. However, this focus on poetics is also something of a flaw: the book doesn’t feel much like a novel. I felt validated when I read that Valente, looking back on her work now, considers it a “two hundred page poem with no columns and [her] whole heart.” I recommend The Labyrinth if you crave gorgeous and innovative uses of language and myth structures, but although I read it in a day, it isn’t exactly a quick read.

Yume No Hon: The Book of Dreams

An aged woman named Ayako lives in medieval Japan, but dreams in mythical worlds that beggar the imagination … including our own modern world.

This is the novel in this collection that I found most interesting of the four. It’s also the least linear. Ayako dreams herself into myths from various cultures, from the Sphinx-and-Oedipus story to Babylonian creation myth, and the way all the myths weave together into Ayako’s life experience, and how Ayako weaves into them, is elegant. Because it is the least linear of the novels, it takes a little time to get a firm grasp on the story, and once you do the Sphinx dream will find a way to throw you off periodically.

When a hero challenges a great and evil serpent, who speaks for the snake? In this version of a myth from the ancient chronicle Kojiki, the serpent speaks for itself.

Where Yume No Hon is nonlinear, The Grass-Cutting Sword is the most linear in the collection (that isn’t to say it’s strictly linear, but it’s much easier to grasp the basic flow of events). In this myth the Japanese god of storms falls from heaven and sets out to kill a monster that has devoured seven young sisters and is about to eat number eight. What I found most interesting in this book was that each sister got her own moment in the spotlight: her character, her desires, her motivations for putting herself in the monster’s way, etc. Frequently stories that involve such repetitive disasters go light on differentiating the characters in each one. That is not the case in The Grass-Cutting Sword.

Under in the Mere

Arthur and Lancelot, Mordred and le Fay. The saga has been told a thousand times, but never in the poetic polyphony of this novella, a story far deeper than it is long.

I’ve read a lot of Arthurian spinoffs; I’ve read a lot of Arthurian originals. Valente’s Arthurian novella is not necessarily a retelling of the Arthurian cycle, nor is it a retelling of a particular tale. Instead it is a collection of character portraits that reinvent the basic frames of the Lady of the Lake, Kay, the Green Knight, Dagonet, Lancelot, Balin & Balan, Pellinore, Galahad, Mordred, Bedivere, and Morgan le Fay. As a different way of approaching and interpreting the well-used cycle, I loved it. However, because it is, like the other novels in this volume, linguistically complex, and because it lacked an overarching plot beyond the general Arthurian cycle, it took me some time to get through. I typically read a character portrait or two in isolation and came back for more later. I don’t think my enjoyment suffered because of this.

The novels contained in this collection are beautiful. For that reason alone I recommend it. But I don’t recommend it for light reading—these aren’t exactly breezy beach reads, but they aren’t meant to be. If you want something linguistically innovative or structurally experimental, pick up this collection or any one of the individual novels. You won’t be disappointed.

Content warnings: Adult topics dealt with in an adult fashion, so don’t go handing them to small children. Not that I think you would after the review I just gave.

Thursday I attended the presentations for two publishers: Pyr and[...]

What the Editors Are Looking For

Something writers often hear is that they should submit their[...]

What I've read of Guy Gabriel Kay is long and[...]