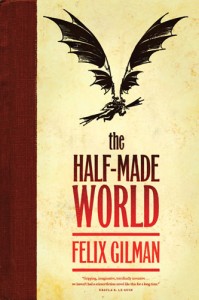 The world is still only half-made. Between the wild shores of uncreation, and the ancient lands of the East lies the vast expanse of the West—young, chaotic, magnificent, war-torn.

Thirty years ago, the Red Republic fought to remake the West—fought gloriously, and failed. The world that now exists has been carved out amid a war between two rival factions: the Line, enslaving the world with industry, and the Gun, a cult of terror and violence. The Republic is now history, and the last of its generals sits forgotten and nameless in a madhouse on the edge of creation. But locked in his memories is a secret that could change the West forever, and the world’s warring powers would do anything to take it from him.

Now Liv Alverhuysen, a doctor of the new science of psychology, travels west, hoping to heal the general’s shattered mind. John Creedmoor, reluctant Agent of the Gun and would-be gentleman of leisure, travels west, too, looking to steal the secret or die trying. And the servants of the Line are on the march.

I can’t remember exactly how I became interested in The Half-Made World, but it’s been a while. I wasn’t quite ready to drop enough money to buy a new hardcover from an author I’d never read though, and that’s why when it came time to find books to populate my Nook, I was ridiculously pleased to see that for some reason, it was on sale for $3.99 (I later discovered that this was a promotional price because the sequel came out last week). It would have been worth paying more than that.

The most interesting aspect of the book, for me, was how every viewpoint character had a strong internal conflict between who they were, what they were doing, and what they wanted to do.

The world of this book feels very magical-wild-West: there are cowboy-like outlaws (the Agents of the Gun), industry-driven railroad men (the men of the Line), the innocents caught in the middle, and the magical Hillfolk that no one fully comprehends. There’s a viewpoint character from every group except the Hillfolk.

John Creedmoor, Agent of the Gun, is ridden by a demon who lives in his revolver. The demon, Marmion, is used to more or less dictating the actions of his host. But Creedmoor delights in defying his master as much as he can, even when it results in demonic torture. Don’t get me wrong: Creedmoor is not a good man, and that point is frequently reiterated through his thoughts and actions. But there is a part of him that knows what good is and that wants someone to do the right thing, even if it isn’t him. John’s internal conflict was, for me, the most compelling conflict of the story.

Lowry is a man of the Line. Men of the Line are supposed to be more or less the same across the board: more or less equally capable, efficient, and unquestioningly loyal to the Engines they worship. His little rebellions are nowhere as brazen as Creedmoor’s, but they wouldn’t fit his character if they were. He is ever so slightly proud of his accomplishments (pride is anathema for Linesmen). He struggles with his desire for glory and his place in a system that doesn’t allow for glory. Especially when he’s put in contrast with Creedmoor, who is a complete glory hog, Lowry is actually an interesting character considering he comes from a group of people who are supposed to be the bland product of assembly lines and cookie-cutter lives. Where he ends up at the end of the book is perfectly fitting (though it felt unfulfilling for a moment and it took me a bit to realize how brilliant it was).

Liv was, for me, the least interesting of the characters. She too is in conflict with herself for most of the book—she struggles with her revulsion and pragmatic acceptance of Creedmoor—but I think she surprised me the least and had the simplest character arc. That said, she is very different, in a good an interesting way, from your typical fantasy heroine. She’s just not, in my opinion, the most interesting person in the book.

Drive to the Sequel

This book’s ending feeds heavily into the sequel. The biggest secret of the book still hasn’t been revealed, new difficulties are introduced, and in general it does a good job of letting you know that if you enjoyed this book, you must pick up the next one as soon as possible. But while I thoroughly enjoyed the setting and I’m emotionally invested in Creedmoor’s character, especially after the events at the end of the book, I’m going to hold off for a bit. Why? Because Liv suddenly became more central (and I already mentioned that she’s not the most interesting for me), and given the back-cover copy of the sequel, I’m not sure that the sequel will end up being what I’d expect. So I’m going to hold off until the price drops to something closer to the price of a mass market paperback. Gilman’s voice and setting are intriguing, and I want to try more; I’m just not quite prepared to pay a premium for it yet.

At long last, Lady Sybil has lured her husband, Sam[...]

From This Reader’s Shelf

Today I’m going to take a timeout from being a[...]