Leaflet Review: The Hum and the Shiver by Alex Bledsoe

Home ReviewsLeaflet Review: The Hum and the Shiver by Alex Bledsoe

Leaflet Review: The Hum and the Shiver by Alex Bledsoe 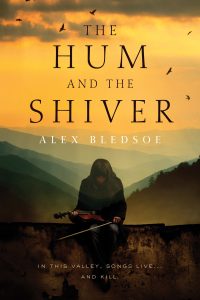 No one knows where the Tufa came from, or how they ended up in the Smoky Mountains of East Tennessee, yet when the first Europeans arrived, they were already there. Dark-haired, enigmatic, and suspicious of outsiders, the Tufa live quiet lives in the hills and valleys of Cloud County. While their origins may be lost to history, there are clues in their music—hints of their true nature buried in in the songs they have passed down for generations.

Private Bronwyn Hyatt returns from Iraq wounded in body and in spirit, only to face the very things that drove her away in the first place: her family, her obligations to the Tufa, and her dangerous ex-boyfriend. But more trouble lurks in the mountains and hollows of her childhood home. Cryptic omens warn of impending tragedy, and a restless “haint” lurks nearby, waiting to reveal Bronwyn’s darkest secrets. Worst of all, Bronwyn has lost touch with the music that was once a vital part of her identity.

With death stalking her family, Bronwyn will need to summon the strength to take her place among the true Tufa and once again fly on the night winds. …

The Hum and the Shiver had me excited: it has an interesting premise, an interesting context, a killer title, and a visually appealing cover (can you believe it’s just straight-up photo-manipulation?). My little brother sent it to me for Christmas, because he is an awesome brother, and I read it in about two days.

The book has plenty of things going for it: an interesting take on contemporary fantasy (it’s definitely not urban, and none of the characters are cliche); the main character grows into a unique type of inner strength; the worldbuilding elements are delightfully fresh (music-based magic in rural Tennessee!). The elements of mystery surrounding the Tufa draw you through the book, and the cast of characters is very dynamic.

One of my favorite characters in the book was Craig Chess, the Methodist minister who has recently moved to Cloud County to work among the notoriously nonreligious Tufa. He’s awesome. He is a man who acts on his faith, who suffers fits of temper and temptation but always finds a way to deal with it, and who, although he earnestly wishes others to find the truth he holds dear, doesn’t need you to be in his congregation for him to wish you the best. He stands in stark contrast to the likes of Dwayne Gitterman, Bronwyn’s ex-boyfriend, who really doesn’t wish anyone well but himself.

So I enjoyed the book. But I couldn’t wholeheartedly recommend it to everyone. The book’s charm very much hangs on its milieu—the unique setup, context, worldbuilding, and small-town characters. In my opinion, the plot was not particularly masterful. Some of the conflicts, like Bronwyn’s inability to play music when she first returns home, are solved with surprising ease. The viewpoint is almost confusingly omniscient (to be fair, I haven’t read an omniscient POV since I read Dune, so my distaste for this technique could just be because I’m out of practice reading it). Plot-driven readers may take issue with a character or two who have more page time than their plot purpose warrants.

After reading the last page, I put down the book and said, “Really? Really that’s how you end it?” The ending didn’t resonate with me in a meaningful way. For a book that has so much heart, it felt surprisingly hollow.

I still enjoyed it. Knowing what I know now, I’d still have read it. It’s a rich and textured novel with plenty in its pages that will please. Its heroine has a very interesting growth trajectory that I found satisfying. Alex Bledsoe recently announced that there will be a second book in the same world called Wisp of a Thing, and I’ll likely read that book as well. It’s not a perfect piece, but like I said, it has a lot of heart, and I’m glad I had a weekend to spend on it. If only for Bledsoe’s beautifully imagined Tufa culture and folklore and they way he put magic into the mundane, I’d gladly read the book again.

Content warnings: Language, sex, discussions about sex, mature themes, some violence (but not much).

The Emperor's Soul showcases a fascinating magic system as the[...]

What the Editors Are Looking For

Something writers often hear is that they should submit their[...]

Leaflet Review: The Girl Who Circumnavigated Fairyland in a Ship of Her Own Making by Catherynne M. Valente

September is a girl who longs for adventure. When she[...]