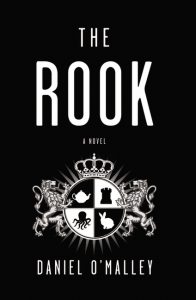 The body you are wearing used to be mine.”

So begins the letter Myfanwy Thomas is holding when she awakes in a London park surrounded by dead bodies—all wearing latex gloves. With no memory of who she is or how she got there, Myfanwy must follow the instructions her former self left behind to discover her identity and escape those who want to destroy her.

She soon learns that she is a Rook, a high-level operative in the Checquy, a secret government agency that protects the world against supernatural threats—from sentient fungus to stampeding ectoplasm—while keeping the populace in the dark. But now there is a mole on the inside, and this person wants Myfanwy dead. […]

Suspenseful and hilarious […] The Rook is an outrageously inventive debut novel for readers who like their espionage with a dollop of purple slime, or their supernatural thrillers with an agenda and a pencil skirt.

In my first post of the year, I said The Rook was first on my list of books I look forward to in 2012 (both chronologically and otherwise). It didn’t disappoint, and I’m glad I own it so I can reread it in the future. There were a few main reasons I had for loving the book Daniel O’Malley wrote.

The pitch for The Rook intrigued me right from the start: the premise is unique because even though it follows a relatively common setup—Myfanwy Thomas lost her memory—the book tackles the concept from a new perspective. The old Myfanwy (who the “new” Myfanwy calls Thomas) has left letters, instructions, and binders full of briefing materials to guide the new Myfanwy, and the new Myfanwy is actually substantially different than Thomas. Thomas’s personality has been erased, so although both characters occupy/ied the same body and have the same skill set, they’re different people. Not to mention the fact that Myfanwy is a high-ranking official in “Her Majesty’s Supernatural Secret Service,” so it’s not like walking into her life is a walk in the park to begin with.

Any memory-loss plot will involve a lot of information being hurled at the reader (and the amnesiac protagonist), which makes such plots prone to infodumps. However, in The Rook the infodumps are laced with another thing I love about the book: a voice so playful and engaging that even personnel dossiers are a joy to read. The voice that infuses the storyline from beginning to end is a blast.

The voice helps The Rook walk the line between humor and heart. There’s no doubt that it is a funny book (if the bunny and the octopus in the coat of arms on the cover didn’t give it away, I’m not sure what would). However, it tugs at your heartstrings too. A lot of the tugging is done by Thomas, the old Myfanwy, in her letters. The way I felt about Thomas progressed through several stages, ending in an affection that almost led to tears for me when I read the last chapter (but I was strong and resisted impulses to let my tear ducts leak).

The stages of my feelings about Thomas mirrored a masterful character arc. I expected Myfanwy to progress through the book, to grow from a personality newborn into a likeable hero who could save the day and beat the bad guys. That isn’t to say her growth wasn’t a pleasure to see—on the contrary, the way she grew to meet the demands of Thomas’s old job and new foes had me laughing and rooting for her cover to cover. But I think the growth of Thomas surprised me more, and shows the unique quality level of The Rook better. Thomas could have been a stagnant character, dispensing advice and knowledge from a static position of competency. With the playful voice, she could have been that way and I wouldn’t have minded a lick. But she went from a rather weak person who earned very little respect to a lovable, sacrificing tragic figure. I was terribly sad that the world at the end of the book couldn’t have both Thomas and Myfanwy.

There were other reasons I liked the book—it doesn’t rely on a romantic subplot, the supernatural powers were innovative and bizarre, the characters are people first and heroes/villains second, the beginning and end have a completely satisfying chiasmic structure—and I’m sure you can find plenty more. So get thyself a copy and enjoy the ride. Then join me in anticipating the sequel O’Malley has already promised.

You can also follow Myfanwy Thomas’s Twitter feed, @RookFiles. Prior to the book’s release Thomas tweeted, but now it’s Myfanwy. She doesn’t post often, but it’s always fun when she does.

Thursday I attended the presentations for two publishers: Pyr and[...]