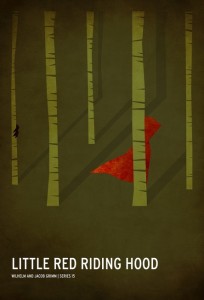 I recently discovered a series of minimalist posters inspired by various children’s stories and designed by Christian Jackson (I didn’t find them by myself; they were in an article on Flavorwire). My favorites among them are Little Red Riding Hood, Rumpelstiltskin, and a toss up between The message of the one duckling that’s different is delightful, but The Pied Piper poster was, I thought, one of the most interesting interpretations of the story because there is so much focus on the death involved; for me The Pied Piper had always been about very personal loss, but not necessarily death, so that was a different take for me (not that I minded; I always love a different take on a folktale).

What interests me (perhaps) most about these posters is how well the minimalism works for the folktales (yes, many of the stories he did technically have named authors, instead of the nebulous “folk,” but they’ve become so pervasive in our culture that they pretty much even out to the same thing). Because these stories are so ingrained and so common, we don’t need much prompting to retell the stories to ourselves. We only need motifs, hints, and light touches to evoke an entire lifetime of stories and retellings. Take the Little Red Riding Hood poster, for example. All you really need to evoke the story is the red cape in the woods; adding the edges of a wolf’s paw adds a tone of menace, but isn’t necessary for you to know exactly what Jackson is getting at.

Think about that for a second: All you need, visually, is three dark fingers and you can imagine the wolf it belongs to, and all the nasty things that wolf will eventually do (depending on which version of the story is nearest and dearest to your heart, those nasty things may be more or less than what I imagine).

Folktales are powerful because they are so common, and because “everyone” knows them. You can use them to enhance, contrast with, or influence anything you’re doing and you’ll be able to strike a chord with your audience. They’re an effective tool in any creators toolbox, whether you are an artist, writer, or any sort of communicator. Stories communicate, and stories you don’t even have to tell people communicate efficiently.

From This Reader’s Shelf

Today I’m going to take a timeout from being a[...]

Leaflet Review: My Mother She Killed Me, My Father He Ate Me

First, let me apologize for my extended absence. I was[...]