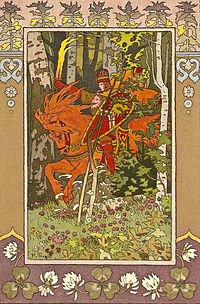 Fairy tales and folktales get handed down, repurposed, and woven into new contexts and patterns every day. We see them in ads and single-panel cartoons, in similes, short stories, and novels. And yet when you ask Western people to tell you the story of, say, Little Red Riding Hood, they’ll probably come up with a lot of the same basic stuff. Some people wonder why stories so well known can continuously find new life; others bemoan the loss of variety folk traditions used to have before they became standardized by the Brothers Grimm and Disney.

But for writers, the fact that there’s a “standard” version of most popular fairy tales is a boon.

The Power of Foil Narratives

When you retell a fairy tale, or when you use a fairytale motif in a scene, chapter, or sentence, you draw on a shared cultural background with your reader. Whatever you say with your fairy tale contrasts with whatever they already know. Initially, that sounds a bit unappealing (if you retell “Beauty and the Beast,” your story gets thrown up next to a golden ball gown and a singing teapot, whether you like it or not). But it really is an immensely powerful tool.

You’ve heard of foil characters, yes? Two characters who share certain things and throw their differences into relief? Using foil characters is a good way to strengthen your characterization and drive interest. With fairy tales, you get an entire foil narrative. Even if your story or scene shares very little with an “original” fairy tale (original is such a messy word when speaking of folklore), if you have a character wearing a red hood, you can evoke an entire parallel plot line that can throw your narrative into relief. Each choice you make gains force and momentum because it contrasts with the story your reader already has in his or her head.

Stories That Rely on Foils

You can use fairy tales as foil narratives in all sorts of ways, and as I said before, you don’t have to write a story that is solely a retold fairy tale to do it. Permit me a few examples.

Using Foils in Your Stories

You can employ a foil fairytale narrative by retelling a tale or merely evoking the idea of it—your reader already has the story in his or her head, so you don’t necessarily need to lay it out explicitly for them. Whether you’re embedding an abbreviated version of a tale in a scene or chapter, retelling the whole thing, or simply setting up a pleasant metaphor, you need give only the basic motifs because the standard fairy tale can do the rest of the work for you (you can give more, of course, but it isn’t necessary).

I’m sure you can come up with more motifs you could use to evoke a foil narrative in your writing, so share them in the comments. Also share your favorite retold tales, or even your favorite “original” versions (I’m partial to bloody animal bride/bridegroom stories, myself).

The Telegraph: Fairytales Too Scary for Modern Children, Say Parents After[...]

I apologize for the hiatus—I know it’s been a while.[...]