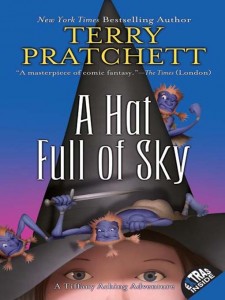 Witch-in-training Tiffany Aching hadn’t expected magic to involve chores and ill-tempered nanny goats! But as Tiffany pursues her calling, a sinister monster pursues Tiffany, and neither mistress Weatherwax (the greatest witch in the world) nor the six-inch-high Wee Free Men (the greatest thieves in the world) can defeat it. When the monster strikes, Tiffany will have to save herself—if she can be saved at all!

I love Terry Pratchett, so I can hardly say anything bad about his books—even though, with so many books on the market, I’m bound to not like some of them. But I liked A Hat Full of Sky. Perhaps not so much as its predecessor, The Wee Free Men, but it was still a very enjoyable book. As always is the case with Pratchett, I both laughed out loud and had a bit of thinking time to go with it.

That said, there were several times where I thought the main conflict had been resolved, only to discover there was a new conflict (though, to be fair, these conflicts were always attached and related; I just don’t think they were foreshadowed). They felt a bit tacked on, if you ask me. However, all the conflicts were thematically consistent, even if they didn’t seem to be all part of the same action arc, so it wasn’t really bad. I was just expecting a book unified by a single action; if I’d been expecting a thematic work I wouldn’t have noticed it at all.

As with The Wee Free Men, the book waxes philosophical. (What? In a children’s book? Absurd.) Pratchett gets away with it because it’s natural to the character—all the ideas are in Tiffany’s voice and they’re things Tiffany would think, what with her First, Second, and Third Thoughts running around. She’s bound to run into some heavy thinking. The other reason it works so well is that Pratchett makes you laugh while he’s going about it, and the things he talks about aren’t controversial in any way: they’re just thing you may not have thought about very much before. Like how full the universe is of things that are interesting an amazing, and how you should never reduce people to things, etc. He couches them in a context that brings the ideas home.

(As a side note, The Wee Free Men introduced ideas that I repackaged and repurposed for discussion in a literary theory class in college. My comments were referenced throughout the semester for their brilliant-ness and relevance, and I felt a little dirty not mentioning that I’d gotten them from a humorous young-adult fantasy novel. But you can’t parenthetically cite your source while you’re talking. At least, I haven’t figured out how to yet.)

That’s really what Pratchett does for me: He takes things I should know and presents them in a mirror that’s ever so slightly askew so I’ll actually see them. Defamiliarization is the term, I believe. And while he defamiliarizes he delights, so I can never complain about a Pratchett book. I’ll definitely be reading the next book in the Tiffany Aching plot arc (once I chew through the stack of books next to my desk, that is), and I’ll probably end up buying them all so future children who use my house as a library will be able to read them. I wish I’d read them as a kid.

Now that it’s after Christmas, I am going to indulge[...]

Koe LeKai was content to live his centuries-long life isolated[...]

In the far future, humans have colonized a distant planet,[...]