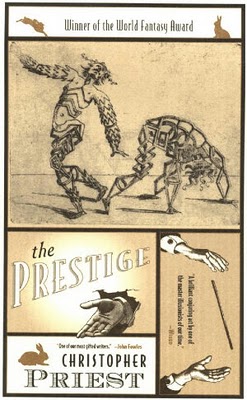 This is a lamentably crappy scan of the paperback cover.

Over the past few weeks I finally read The Prestige by Christopher Priest. (I have, of course, seen the movie, but that’s kind of irrelevant.) For those of you who haven’t seen the movie (and thus can’t puzzle out what The Prestige is about), I provide the back-cover copy from my paperback edition:

In 1878, two young stage magicians clash in the dark during the course of a fraudulent séance. From this moment on, their lives become webs of deceit and revelation as they vie to outwit and expose each other.

Their rivalry will take them to the peaks of their careers, but with terrible consequences. In the course of pursuing each other’s ruin, they will deploy all the deception their magician’s craft can command—the highest misdirection and the darkest science.

Blood will be spilled, but it will not be enough. In the end, their legacy will pass on for generations … to descendants who must, for their sanity’s sake, untangle the puzzle left to them.

The book is told through a series of first-person accounts that are scattered throughout time: some are in the present (from the descendants whose sanity is at stake) and some are from the past (the dueling stage magicians, i.e. the portion the movie covers). The accounts are mostly written in personal journals, most notably from Alfred Borden (the first past-based viewpoint character) and Rupert Angier (the last past-based viewpoint character).

The narrators are obviously unreliable. In Borden’s journal he confesses this up front: “The very act of describing my secrets might indeed be construed as a betrayal of myself, except of course that as I am an illusionist I can make sure you only see what I wish you to see. A puzzle is implicitly involved.” Because Borden so obviously hangs a lantern on the fact that he can’t be trusted, it becomes apparent that trusting Angier is risky business as well.

Having seen the movie, I already knew some of the secrets and illusions Borden and Angier would put out there (though Angier’s secret is notably different from what it was in the movie). In many ways, I wished I hadn’t already seen the movie—I wish, for example, that I could regain the initial effect of reading Borden’s contradictory prose without knowing the reason behind it. However, I relished the more intimate look into the minds of characters I already knew (in their essentials). The film does a wonderful job of focusing on the outward relationships the two magicians have and the effects of their secrets on those relationships, but the book brings you closer to the individuals.

The prose was interesting, and the characters’ voices and mannerisms were quite distinct. Angier is a penny counter; Borden is an idealist and theorist. Andy Westley/Nicholas Borden (he was adopted, and the Westley name is his adopted name and how he thinks of himself) shows a realistically confused young man; Kate Angier (great-granddaughter of Rupert) delicately captures her childhood experiences from an adult perspective.

Having so many narrators fragments the storyline—which is only more fragmented by the fact that many times you can’t trust what you’re being told. However, except for Andy’s account, each individual gets to go through his or her story, beginning to end, without interruption. I loved this. Each character was engaging enough alone to draw me into the story, and there were secrets and details enough to discover that repeated plot points weren’t redundant. Andy’s account bookends and separates the others’ accounts: because he comes into the Borden–Angier feud as an outsider, it’s almost as though the reader is discovering the family secrets as he does, so his bookending is appropriate.

I immensely enjoyed the book. The characters change, develop, and evolve over the many years of their lives documented within its pages. The story essentially comes down to one of obsessions, whims, and deep-seated aspirations. (It reminds me of English-language Romanticism, Gothic elements and all.) The Prestige, in the end, is a ghost story: the ghosts of whims, the ghost of obsession, the ghost of aspirations of immortality, whether through fame and glory or other means. The ghostly prestiges—the lingering effects of the novel—are the ghosts of human frailty and desire. As such, the book is chilling and fascinating, and it echoes painfully with reality—as nearly all good fantasy does.

My only complaint would be that there were occasions when I didn’t believe that the words Angier were using were native to his time period and experience. Not to say that they couldn’t have been, but they didn’t ring true in my ear and jerked me out of the illusion of reading for a while.

As a side note, I couldn’t help comparing the novel and the film, if only to decide if I still liked the film adaptation after reading the book (I’ve watched the movie many, many times because I like it so much). I can’t say that I disagree with any of the choices the adaptation made. Focusing only on two characters made it easier to fit in the time, and focusing on the external effects of their decisions translates better to film and analyzes another side of obsession (as well as answering questions that Angier himself raises in his account). I even agree with how they changed Angier’s secret because it made it easier to get the strong impact without the luxury of time that a novel affords. I’d say I appreciate the film even more now that I’ve read the book (though, as I said before, I wish I could have had an untainted reading of the book—alas, it is not to be).

Christopher Priest’s The Prestige won the World Fantasy Award in 1996.

Leaflet Review: Alice in Tumblr-land: And Other Fairy Tales for a New Generation by Tim Manley

Peter Pan finally has to grow up and get a[...]

Leaflet Review: The Girl Who Circumnavigated Fairyland in a Ship of Her Own Making by Catherynne M. Valente

September is a girl who longs for adventure. When she[...]

I apologize for the hiatus—I know it’s been a while.[...]