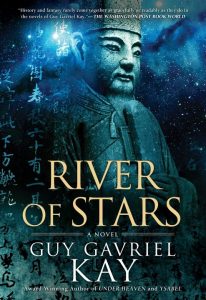 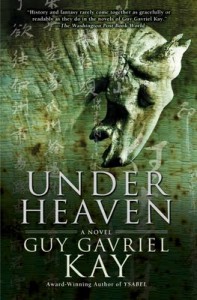 To honor the memory of his recently deceased father, a general who led the forces of imperial Kitai in its last great war twenty years before, Shen Tai has spent the two years of official mourning alone at the isolated battle site, burying as many of the unnumbered dead lying there as he can. The dead are equally Kitan and their Taguran foes; there is no way to tell the bones apart, and he treats them all reverently. At night Tai can hear the ghosts moan and stir, and occasionally, when one voice falls silent, he knows it belonged to someone he has laid to rest.

Both sides respect his solitary work and take turns bringing him supplies, and it is during such a visit from a Taguran officer that Tai learns powerful forces have taken note of his vigil. The White Jade Princess Cheng-Wan, seventeenth daughter of the Emperor of Kitai, sent west after this last battle to seal the peace with Tagur, is pleased to present him with two hundred fifty Sardian horses. They are being given to him, she writes, in royal recognition of his courage and piety and of the honor he has done the dead.

You give a man one of the legendary Sardian horses to reward him greatly. You give him four or five to exalt him above his fellows, propel him toward rank, and earn him jealousy, possibly mortal jealousy. Giving him two hundred fifty is unthinkable—a gift to overwhelm an emperor.

Tai is in deep waters. He needs to get himself—and his own emperor—back to court alive. Riding the first of the Sardian horses[*] and bringing news of the rest, he starts east toward the glittering, dangerous capital of Kitai, and gathers his wits for a return to his forever-altered life.

Under Heaven is the first book I’ve read by Guy Gavriel Kay. It’s not your typical kettle of fantasy—far from it. While I was reading, I tried to articulate Under Heaven’s flavor … and failed miserably. However, Kay conveniently inserts this into the book’s epilogue: “Every single tale carries within it many others, noted in passing, hinted at, entirely overlooked. Every life has moments when it branches, importantly (even if only for one person), and every one of those branches will have offered a different story.”

The book fully illustrates this idea, and it illustrates it well. There are many places where the plot takes a different turn than what you would expect from a typical, trope-laden book, and most of those differences are driven by a character choosing a different branch, even though that choice may seem insignificant at the time. This is an interesting concept, and Kay explores it well.

That said, I didn’t fully enjoy Under Heaven. For many, many chapters at the beginning, I felt that the viewpoint characters withheld information in an infuriating manner. Two characters would talk and come to a decision, then continue talking and taking action, but I wouldn’t learn what the decision was for another chapter or so. This deliberate withholding irritated me as a reader.

I probably could have overcome this problem, since it’s relatively minor. However, I ran into the same problem with Under Heaven that I had when I was reading The Good Earth in high school. The way the men in these books (who are also the main characters) think of and treat women sickens me, and I have a hard time sympathizing with them. The main character, Tai, is a decent individual overall. However, there is more than one instance in which his views towards women make me want to punch him in the face, so I have a hard time casting him in a good light when I’m constantly concerned that I’m going to want to punch him in a few pages.

All in all, this means that Kay accomplishes a good verisimilitude of ancient culture. There were many cultural institutions that were so normal that they didn’t register as cruelties or hypocrisies when they were used by upstanding citizens. Tai is better than most (if not all) of his peers. He is simply a man of his cultural moment. That doesn’t change the fact that institutions in that cultural moment irritate me.

It boils down to this: Kay does a wonderful job of telling the story he sets out to tell. It’s just not a story I was readily receptive to. There were many aspects that captured my interest, there were several characters that fascinated me, and I was happy to read the book all the way through to the end. I can even think of people I’d recommend this book to without reservations. But for me and my tastes, I’m glad I bought it during the liquidation at Borders and not at full price.
_____________________

* I would like to mention that this first horse only serves an important role for a few chapters. After that it basically fades to the background and is pure scenery. These Sardian horses instigate the plot but have little hand in it.